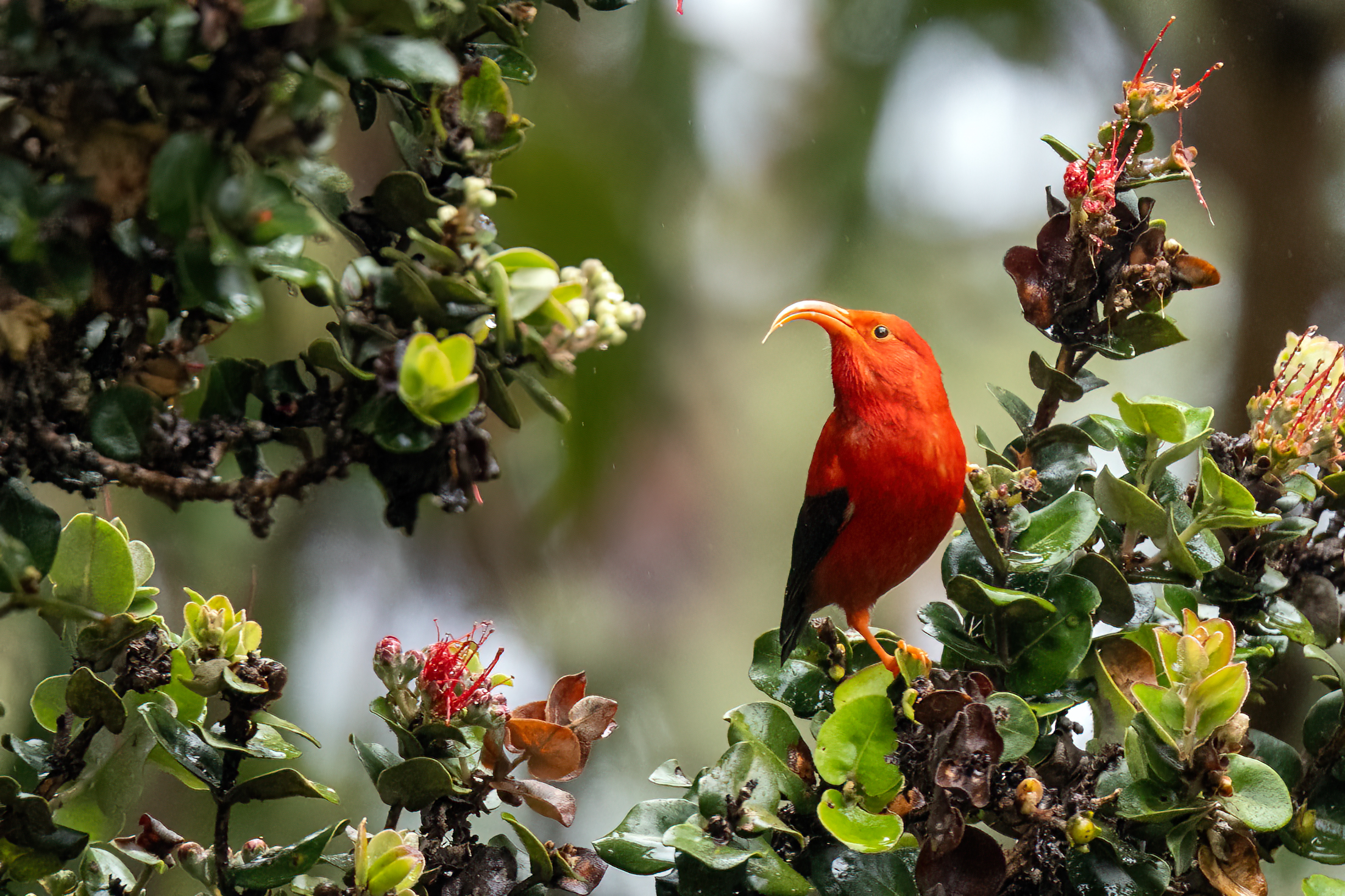 For many, Hawaiʻi is a destination of beaches, snorkeling, and waterfalls.  Few realize that, in the forests far above the coastal resorts, high on the slopes of ancient volcanoes, some of the world’s most rare and unique birds make their home.

The native birds of Hawaiʻi are seldom seen, having been driven to higher elevations by the many threats they face.  Habitat destruction, competition with and predation by invasive species, and–most devastating of all–deadly introduced diseases, have sent their numbers into steep decline.  Chief amongst these threats is avian malaria, spread by mosquitos.  Native birds are now found only in places where mosquitos cannot survive, typically above 5,000′ (1500m) elevation.  They frequent isolated forests where native plants and trees still predominate, far from where tourists typically tread.

But these birds are beautiful and display incredible adaptations, evolving to fit highly specialized roles upon this incredibly isolated island chain.  They represent a fascinating evolutionary story and deep cultural significance.

Photographing these fascinating birds was my primary goal on a recent trip to Hawaiʻi.

Of course, the first challenge in photographing these birds is finding them.  I spent the months ahead of my trip doing research, learning their unique calls and looking for the most likely sites to locate them.  I settled on a handful of promising mountain forest trails to visit, along with reserving a spot to the restricted-access refuge of Hakalau Forest NWR.

The research paid off.

Out of the fourteen endemic species on the Big Island, I was able to observe eleven of them and photograph ten.  This included some of the rarest and most difficult to find, such as the ʻAkiapōlāʻau, the Hawaiʻi ʻAkepa, and the ʻAlawī (Hawaiian Creeper).  Also photographed the iconic ʻIʻiwi, the melodious ʻApapane, the ʻAmakihi, the ʻŌmaʻo, the ʻElepaio, the Nēnē (Hawaiian goose), and the Pueo (Hawaiian Short-Eared Owl).  The only one sighted but not photographed was the ʻIo (Hawaiian hawk).

Of course, once sighted, the next hard part is actually photographing them.  For this, I set out with the Nikon Z9, equipped with the Nikkor 500mm f/5.6 PF lens.  Brought along a 1.4x teleconverter, but swapping it proved something of a hassle.  I tried several approaches during my trip, including shooting off a tripod and gimbal from a relatively stationary position and simply walking around handheld.  For the most part, handheld proved to be better for a variety of reasons.

For one, at this time of year, these birds tend to be found in the highest parts of the canopy–often 80′-100′ above the forest floor.  This made shooting angles that were sometimes outside the movement range of a gimbal.  Additionally, these birds are fast.  They hop quickly from branch to branch and tree to tree, moving swiftly throughout the forest as they sip nectar or dig insects from the flowering ʻōhiʻa lehua and koa trees.  Once you’ve spotted one, you have to move quickly to get your lens on it.  More often than not, they would vanish back into the canopy and leave one with a lovely photo of an empty branch.  It took days of shooting to really start getting to know their behavior and track their movements.  It was, without a doubt, the most challenging wildlife photography I have ever attempted.

But in the end, all this work was well worth it!

Some of these photos, particularly of the spectacular ʻIʻiwi, are some of my favorite photos ever taken.

And, from the time spent observing these amazing birds, I have learned quite a bit for future reference.  Armed with these lessons learned, I expect my next trip to be even more successful.  I’m already looking at when I might be able to return for another round.

Of course, it wasn’t only birds that I was in Hawaiʻi for, though they were certainly a large part of my trip.

On my last trip to Hawaiʻi, time constraints prevented me from doing something I very much wanted to accomplish.  While I was able to photograph the eruption at Kīlauea during the day, I did not get the opportunity to photograph the lava at night.  So, on this trip, I made a special priority of getting to Halemaʻumaʻu with plenty of time in the evening to spare.

And it was well worth the extra planning.  At night, the lava glows an otherworldly red.  This red glow lifts all the way into the clouds, painting them red and white in the moonlight.

Since childhood, I have had a long-standing love of volcanoes.  Seeing Kīlauea in eruption was a goal since I was barely five years old.  And it did not disappoint.  There’s a power there that must been seen and experienced to appreciate.  Pele is awake and her works are incredible both in their capacity to create and destroy.

It is truly awe inspiring and I was pleased to be able to capture some of that feeling in photos and video.

There was more I had hoped to do, I will admit.  I missed my chance to see a the palila, an endemic bird that lives in dry rather than wet forests.  I did not get to do any astrophotography, which I had planned for.  I did not get to photograph any of those waterfalls or coastlines that make such lovely landscape shots.

Of course, this was partially due to unforeseen circumstances.  While tidepooling and attempting to get a better angle to photograph some of the crabs living therein, I slipped on an algae-slicked rock, fell, and crashed my head into a lava rock.  The rest of the day was spent in the ER, where it was determined I had sustained a maxillary sinus fracture.  This pretty much ended my trip, though I still managed to pull it together enough to visit Hakalau and photograph the birds there (all while in excruciating pain).  But pretty much everything else had to be canceled.

I’m home now, but it’s likely I will be out of commission for anything that might cause further injury to my facial bones for two to four months while I recover.  As a result, I expect there won’t be too much travel in that time.  Unfortunately, I’m likely going to cancel my winter trip to Utah, as I can’t risk slipping on icy trails and jarring these fragile bones while they heal.  Same for my usual Thanksgiving Mojave Desert trip, as I don’t see myself sleeping comfortably in a tent while in this much pain.

But this injury, particularly since it involves my sinuses, could potentially put my future scuba diving at risk.  So I am taking no chances with my recovery.

Once I am able to see a specialist here at home, I’ll know better how to proceed and will see about planning trips after that 2-4 months.  But in the interim, I’ll be taking it easy and playing it safe.  I might still be able to do some low-intensity local birding trips after a few more weeks of healing, but we’ll see.

But, that’s the way it goes.  There may be a dearth of fresh photos for a while, but it may give me some time to work on editing some older projects that are still outstanding.  And working on my film negative scanning project, as well.  There’s always something to work on.

So… until next time!  Mahalo! 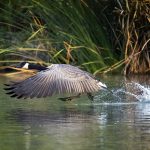